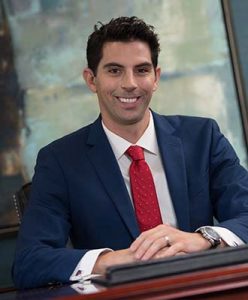 A partner at Boughter Sinak, LLC, attorney Kenneth J. Sinak focuses his practice on personal injury, wrongful death and workers' compensation law. Mr. Sinak is a Fort Wayne native who is committed to representing his clients and fighting for a safer community.

After graduating from Homestead High School, Mr. Sinak was fortunate to receive the Evans Scholarship to attend Indiana University based on his academic achievements, community involvement and record as a caddie at Fort Wayne Country Club. Mr. Sinak earned his undergraduate degree in Biology from Indiana University where he participated in numerous campus groups and was a three-year member of the Evans Scholars Little 500 team.

After graduating from Indiana University, Kenny was awarded the Thomas More Scholarship and attended law school at Marquette University in Milwaukee, Wisconsin. During law school, Mr. Sinak was a summer associate at Boughter Law Office, where he assisted in prosecuting injury claims, including conducting research and brief writing on complex litigation matters.

Following law school, Mr. Sinak began his legal career working for a creditor's rights firm where he had frequent courtroom experience. After spending five years in Wisconsin, Mr. Sinak returned to his hometown and became an associate attorney with Boughter Law Office. Following years of exemplary service to the clients of Boughter Law Office and having earned a reputation as a skilled litigator well respected by his peers, Mr. Sinak was chosen to become a partner with Robert Boughter to form Boughter Sinak, LLC.

Mr. Sinak practices exclusively in accident and injury law as well as workers' compensation law. His most recent victory was a Fort Wayne accident case where the insurer had boastfully offered $0. Due to Mr. Sinak's thorough trial preparation and skillful advocacy, he won an award of three times the amount the client was willing to settle for prior to trial.

When not engaged in the practice of law, Mr. Sinak enjoys spending time with the love of his life, Kendra, watching sports, and volunteering with his therapy dog, Penny.