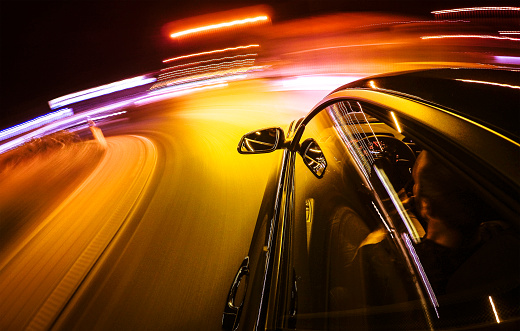 Too many motorists think they are driving on the oval at the Indianapolis Motor Speedway. Speeds in excess of 100 mph – more than twice the posted limit in some areas – are not uncommon. Here's what drivers in Indiana need to know about this speeding epidemic.

What a local TV news crew learned while accompanying patrol officers was astonishing.

Fleeing from police at high speeds

One driver traveling 84 mph fled from police officers, who stopped the high-speed pursuit in the interest of public safety. Police recorded the vehicle's license plate information and it revealed the owner of the car, who had an outstanding warrant for resisting arrest and dealing drugs, was considered to be armed and dangerous. While the pursuit was terminated, police say they plan to "pay a visit" to the suspect's home.

One female driver stopped for going 69 mph in the 45 mph zone admitted to smoking pot before getting behind the wheel of her car. She passed a field sobriety test and was issued a speeding ticket before being sent on her way.

A driver who was stopped for speeding at 75 mph confessed that he has never had a driver's license. The driver was ticketed and had to wait for a relative with a valid driver's license to come and pick up his car.

Putting everyone in danger

While the news crew’s focus was West 38th Street, police say the speeding problem is rampant. “It is everywhere in the city,” said Community Affairs Officer Marlin Sechrist. “Again, we are not focusing on the people of the general public that are just doing 1-2 mph over the speed limit. We are looking for those aggressive drivers that are putting themselves and everybody else in danger.”

Speeding is a problem everywhere, and it's getting worse

Officer Sechrist, a 20-year veteran of the department, said he hadn’t seen this type of speeding before the COVID-19 pandemic, which is a common refrain among police departments across the country. With less traffic on the roads as the nation locked down during COVID-19, motorists apparently became more comfortable about speeding in excess of 100 mph.

From California to New York, law enforcement agencies say the increase in speeding is leading to more car accidents. In 2020, about 42,000 people died in motor vehicle accidents, an increase of 8% over 2019, when far fewer motorists were on the road.

Drivers are more likely to lose control at faster speeds, which means more high-impact crashes, severe injuries, and fatalities. This is especially alarming to public safety officials because the nation is just beginning the busy summer driving season.

Know your rights when you become a victim

No matter how careful you are on the streets of Indiana, you are at the mercy of other drivers. It only takes one bad decision by someone else to change your life forever.

If you were injured or a loved one died in a crash caused by a speeding driver, you have the right to hold the at-fault party financially responsible for your damages. You may be able to recover compensation for your current and future medical bills, lost income, your pain and suffering, and more.

At Boughter Sinak, LLC, our highly skilled attorneys know how to take on insurance companies and fight for maximum compensation. Don't let anyone back you into a corner and convince you to settle for less than what you're entitled to. You shouldn't have to pay for someone else's recklessness.

See what an experienced car accident lawyer can do for you and contact us right now to set up a free consultation. We have offices in Fort Wayne and South Bend, Indiana, and would be honored to speak with you about your potential legal case.